Do not let the poster fool you! Jojo Rabbit seemingly opens as a mere spoof but when the protagonist Jojo Betzler (Roman Griffin Davis) starts to develop as a character, the movie grows with him. From a pep-talk-giving Hitler to the crushing devastation of his fanaticisms – let this movie take you on a journey through a little boy’s mind in Nazi Germany. 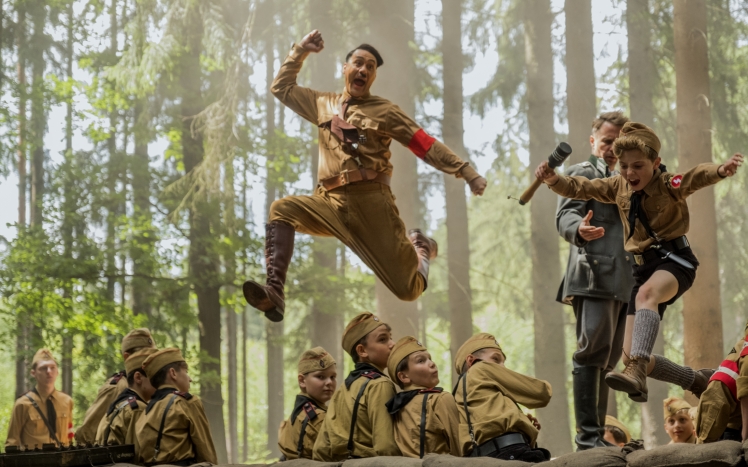 Jojo Betzler grows up like any kid in his town: studiously fulfilling tasks, aware of the obligation to devote every part of his life to his country. Without questioning, he jumps on the bandwagon, joins the Hitlerjugend and embraces a future full of grenades, military honors, knife tossing and defeating enemies. But his determined mindset gets challenged when he faces one of those enemies (Elsa played by Thomasin McKenzie) at home, literally crawling inside his walls.

Taika Waititi artfully explores the idea of a follower (Mitläufer) during WWII: Here we are presented with a ten-year-old boy who naively wants to be part of the most popular gang which happens to be the SS. It starts as a silly game supported by imaginary Hitler (Taika Waititi) hyping up Jojo, cheering him on. And I was hesitant – how could they maintain this tone throughout the movie? Could it crash and end like one of those repulsive Twilight parodies? Thankfully, it doesn’t. Instead, it matures along with Jojo overpowering his brainwashed, porpaganda-poisoned self.

The audience is taken from green forests to gray city walls collapsing, the colors gradually fading. Not only the surroundings change around Jojo, his own mind has to digest love and hate to a previously uncharted extent. This is probably best represented by his imaginary version of Hitler transforming from a laughable sidekick to causing cold shivers with his gruesome political rants. It proves once again that Taika is not only incredibly funny, he also genuinely knows how to direct a dynamic movie and balance complex emotions.

The one thing consistently spreading joy is Jojo’s mother Rosie (Scarlett Johansson) who has a fascinating relationship with her son. She is an incredible woman who lives several lifes at once: the good German wife, a loving mother, a member of the resistance. All the while Jojo stubbornly follows his “dream” to become part of Hitler’s guard, she drowns him in love and desperately tries to let him experience life like a ten-year-old should. It is incredibly sweet but heartbreatking because, the whole time, she is scared of her son. Scared of what he would do if he knew her true opinion. She probably felt like she could be herself only when she was locked inside the wall with Elsa.

Humor, heart and Hitler? Jojo Rabbit proves it is not impossible to masterfully combine all three without undermining the horrific consequences of that era. Sam Rockwell (Captain Klenzendorf) delivers another brilliant performance as a grumpy military instructor who will suprise you with all his fabulous facettes. His right-hand man is played by Alfie Allen (Finkel) and their relationship is responsible for some good laughs, however subtle their comedic intent. Rebel Wilson (Fräulein Rahm) is the one who carries most of the ridiculousness through to the end and were it not for the overall applaudable balance in this movie, she would’ve dragged it down. What really fascinates me is the mostly indifferent reaction my fellow audience had at most of the jokes (Austria?). Not to say we didn’t chuckle but the general atmosphere more so resembled a common curiosity about what would happen next.

And whatever came next definitely surprised me more than once. Some of the dialogue between Jojo and Elsa beautifully showcases Taika’s writing talent and his ability to express abstract concepts through simple words – the way children would likely communicate in their situation. The Germans mainly were the focal point of mockery but there are situations which rival the infamous milk scene from Inglourious Basterds. In no small part due to a sickening portrayal of a Gestapo officer named Deertz by Stephen Merchant. This movie is not precarious in showing the horrifying consequences of war when women and children pick up weapons and people are starving in the streets. And yet, Jojo Rabbit leaves you with hope instead of terror.

Exploring a child’s perspective does not equal a lack of depth or complicated moral conflicts. In addition to a very intriguing and perhaps unusual introspective, the movie shapes and shifts alongside and through Jojo and that is what makes it so enjoyable. It is taking the piss while deconstructing the idea of superior races and bigotry in such a simple but truly impactful way, no less could be expected by the exceptional Jewish-Maori Taika Waititi who continues to bless us with wonderful movies like Jojo Rabbit.

PS: On the topic of accents. Am I the only one who is bothered by characters talking to each other in English but with the adequate accent while they’re supposed to be authentic people living in Germany? I’d rather have them speak in “native” English and regard it as a translation, given that the actual characters wouldn’t converse in English anyway. To me, that almost feels like breaking the fourth wall. However, there are far worse offenders than this movie – have you seen the dreadful Red Sparrow? But what do you think about this?