Ok, I admit, this is for sure the most clickbait-y title I’ve written to date. Lemme explain.

Throughout the cold and rainy month of November, I have taken up a book series which I have been looking forward to for a good long while: the A Court of Thorns and Roses trilogy. The following is NOT a review of the series but rather an extensive statement of confusion about, well, the lack of ‘men’ in it. Not in terms of characters, but more literally the complete absence of the word ‘man’ – so odd, I know.
Watch out, here come the spoilers. 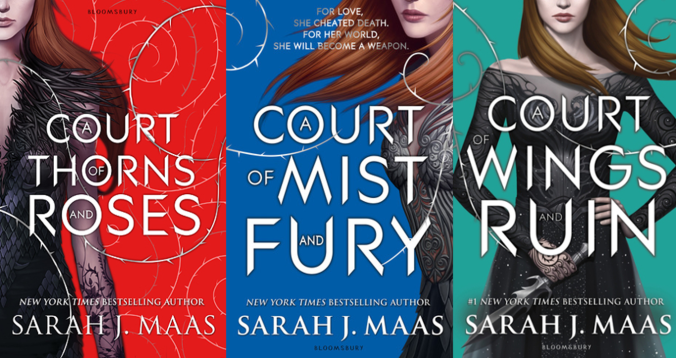 A quick summary of the plot so far: The first book in Sarah J. Maas’s fantasy series revolves around the (arguably not entirely annoying but still fairly lacking in personality) protagonist/narrator Feyre, initially a human, who moves more or less voluntarily into a land of fae and fairies called Prythian. She falls in love with her kidnapper – all Stockholm syndrome/ Beauty and the Beast style – and has to go head-to-head with some dangerous and unsavory characters. In the end, she is victorious against all of them and frees the fairy realm of an evil curse. Oh, and she turns into a fae herself.

Book number two, A Court of Mist and Fury, has Feyre realizing her former beau ain’t the one for her. Through gaining knowledge and exploring more of the world, she learns of her extensive new powers and disovers herself in the process. She falls in love with her ‘mate’ – basically a predestined perfect match of the opposite sex (it’s all very aggressively hetero) – and together they prepare for the war against Hybern, the rival kingdom.

I am currently halfway through the third and final book in the trilogy, A Court of Wings and Ruin. The first two have been actually quite entertaining. I did enjoy reading them, despite some awful choices on the author’s end (*cough* romanticized and excused sexual harrassment *cough*). The world is interesting and many of the characters very charming. It’s an easy fantasy story to get swept up in. However, although as a whole it’s not a particularly fast-paced nail-biter of a story, the third book is thus far just SO. GODDAMN. BORING. Up until page 300, there has been only one (!) exciting sequence; other than that, only meetings and talking. How riveting.

I thought this was a book about impending war! Where is the thrill? The fear? The table-turning acts of defiance?

Over the course of reading this series, I did notice Maas seemingly loving a few select words and phrases. Do you ever notice while reading that the author has a special little place in their heart for those kinds of words that they think are just perfect but they use them so ungodly many times that reading becomes more than a bit annoying? (I may remind you about a similar critique in my Savior’s Champion review) Well, Maas appears utterly infatuated with gossamer, busybody, loosed breaths and, well, one more quite peculiar choice:

It might have been an issue in the first two installmentsas well but, due to the lack of plot in #3, her repetitive writing and choice of words are just so much more glaring to me. The problem I’m talking about is the use of “male” as a noun. Every guy is described as ‘the male.’

Granted, the characters in these books are not human, so maybe the term ‘man’ might not be accurate, but I refuse to believe that a society that has existed for several thousands of years has no names for male or female entities synonymous with man/woman. Even if guy/dude or gentleman/fellow are too casual or uptight, respectively, the book does use the quite literally aristocratic-sounding titles Lord and Lady. So even on a semantic level, there is a certain tether to human societal constructs. Moreover, the protagonist does indeed refer to male fairy children as boys, which makes it all the more frustrating that the simplest and likely least noticeable of terms, man and woman (especially if alternated with male and female, if need be), are simply left out of Feyre’s vocabulary.

Frankly, it makes Maas’s writing style look childish and reminiscent of fan fiction in which young, inexperienced writers try out these exact phrases – “the male fixed her with an unforgiving glare” and the like – in order to avoid word repetition. But that’s just it. The book doesn’t even use man. Ever. It simply repeats male and mate about a hundred times per chapter.

And so is it that I wonder: What is wrong with ‘men’?

Would the denotation seem too human? Take away too much from the etheral beings created in Maas’s mind because men are flawed and we can’t have that in our love interests? Does ‘male’ sound more poetic? More unattainable? These do seem to be the qualities the author is going for with her fae characters.

Or is it that in the author’s mind every male character is described exactly the same in terms of looks, save for hair and eye color of course. They are all tall, broad-shouldered, muscular alpha males with jawlines that could cut granite and whose hands are strangely always callused … which apparently is a sexy quality in a guy’s hands? idk.

My guess is this: calling them men might, in the author’s eyes, either take away from their individuality by putting them in a more mundane light or, and this would support the idea that in the story every dude bro has essentially the same aesthetic appeal, it would add too much individuality, since there are innumerable kinds of men but ‘males’ are merely a category within a species.

Side note: Women are treated similarly in the series, but they are far less often addressed with ‘the female,’ so it is not nearly as obvious and bothersome.

Either way, I was hoping that this rant would work as a bit of a pick-me-up before I return to finish this series. Fingers crossed Maas added some more pizazz towards the ending.