You had me at Jacob carrying a bucket and over-9000 wand flicking.

Some time ago, I posted a Fantastic Beasts and Where To Find Them Rant that summarized all the things I thought went wrong. A little while ago, a trailer reaction to The Crimes of Grindelwald followed that sparked new hope for this franchise. And now that I’ve seen the movie, I stand corrected. Mostly! 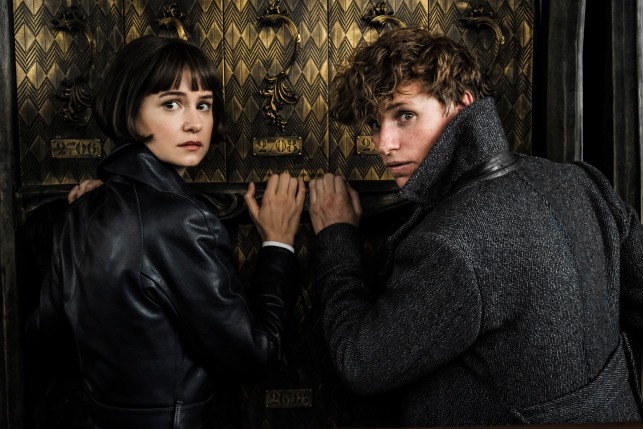 Potterverse veteran David Yates yet again returns to the magical world of witchcraft and wizardry in the second instalment of the Fantastic Beasts pentalogy. Newt Scamander (Eddie Redmayne) is back in action and faces seemingly impossible tasks. Be it fighting against Dark Magic or developing more advanced social skills. After basically rejecting two assignments from each the British Ministry of Magic and Albus Dumbledore (Jude Law), Newt finds himself stumbling (and mumbling) into the middle of things anyway. And wherever he goes, his extension-charm-briefcase filled with sweet and terrifying beasts follows.

Just like no one could get enough of Ezra Miller’s Paris premiere outfit, everyone wants a piece of his character Credence Barebone. This Obscurus-powered kid seems to be the new Undesirable number one. Among his headhunters is no other than Gellert Grindelwald (Johnny Depp) whose blonde, spiky hair is enough to leave people petrified. The movie starts out with an incredible display of his magical skills in a tantalizing breakout sequence. Gellert’s swish and flick is on a whole new level. Voldy has nothing on this guy. As for JD’s performance, he has massively improved his delivery and despite not saying an extensive amount of words, his presence is gloomy and evil.

After the gang’s reunion, Newt, Tina (Katherine Waterson), Jacob (Dan Fogler) and Queenie (Alison Sudol) kinda, sorta work together in the beginning. While following people’s trails, Newt shows off some impressive Batman-like recreation of crime scenes and demonstrates his creativity and craftiness in utilizing his creatures’ abilities. However, the matters of the heart are complicated, especially if you mix them with politics. Realizing someone you love has completely different believes, might obliterate a relationship. And the return of Newt’s high school sweetheart Leta Lestrange (1-look-repertoire Zoe Kravitz) doesn’t exactly make things easier.

What you can expect from The Crimes of Grindelwald is a cleverly constructed tie-in into the Harry Potter universe and a really smart continuation of the first film. JK Rowling knows what she’s doing, of course. Young and hot Dumbledore is just an upgrade we’ll have to accept and why shouldn’t the long-bearded, gay, knitting-loving, gown-wearing, most powerful wizard of all time, Dumbledore have an exciting past, especially regarding Grindelwald?

This pentalogy already has some darker themes than the Harry Potter series and in this movie, they’re stirring right toward the black hole. Personally, I really enjoyed an even more menacing and depressing villanous opposition while also exposing its allure to people who feel oppressed. Often, all you need is a smooth-talker and maybe you’ve guessed that this is definitely part of Grindelwald’s skill set. As dark and dull the atmosphere is, as bright and beautiful are the visual effects and costume designs. This movie most certainly offers fantastic feasts for your eyes and excitingly teases all your other senses.

The Crimes of Grindelwald is darker, more dangerous, has seriously breathtaking magic in it and smartly continues the story of Newt and Co. Additionally, there are so many surprises and reveals, a spoiler talk cannot be prevented (find it here). JK Rowling simply knows how to spellbind her way through a story.

One thought on “You had me at … THE CRIMES OF GRINDELWALD”

It's been a while but we're back with a banger 👌 Head on over to the blog for Viki's review of the new #amazonprime original The Boys 📺 . #theboys #primevideo #superheroes #simonpegg #anthonystarr #chancecrawford #jackquaid #jessetusher #karlurban #lazalonso #dominiquemcelligott #supes #fuckingdiabolical
We hope you had fun at the Vienna Pride celebrations last weekend, we sure did ;) #LoveIsLove . #pride #regenbogenparade #vienna #europridevienna #europride2019 #pride2019 #lgbtqia #lgbt