I cracked under the pressure of the promise of unparalleled convenience that comes with the e-book.  (Shame! *ding-ding*)

I used to be a stark defender of books made of paper but the rush of clicking a button, paying less and saving unnecessary packaging material finally got me.

BUT! I have found a way to redeem myself in the eyes of all you aesthetic bookstagram #shelfie queens. The sneaky little loophole to reading both paper and electronic versions while losing none of my old-school belletrist moral high ground: The only books I am going to read as e-books will be those I deem mediocre and below! That way I don’t have to spend my precious time waiting around for it to arrive and I don’t have to give up my limited shelf space for such undeserving pieces of literature.

“Why would you read such books at all, Leonie?”
“Good question, Leonie!”

Curiosity. It must have cost me eight lives at this point.

Which is the sole reason I picked up (or, I guess, downloaded) Jenna Moreci’s The Savior’s Champion. It is the second novel, as far as I’m aware, that she self-published and let’s just say the reviews for the first one were less than stellar. It’s titled Eve – The Awakening and if you want to know readers’ two-cents, you needn’t go further than Goodreads reviews. Having read those but also really enjoying Jenna’s YouTube channel, I was quite conflicted. I thought, someone who professionally gives advice to writers, helps them establish characters, build worlds and find the magic in their writing, couldn’t truly be the creator of such mediocrity, could they?

The Savior’s Champion kept lurking in the back of my mind, comments about Jenna’s previous work making me hesitate to purchase. But when I saw her video describing which songs she blasted while writing each chapter, I was irrevocably intrigued! A few swift mouse clicks and I called TSC mine. 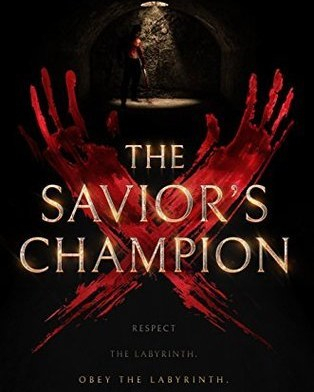 Right out the gate, it becomes pretty clear that this book is little more than a run-of-the-mill YA fantasy, thinly veiled by gore and gratuitous swearing. I was immediately disenchanted.

The novel begins with a prologue that was vastly more interesting and similar to the dark, mysterious vibe the author was trying to achieve in the other 28 chapters. From one page to the next, we are introduced to the world roughly twenty years later and to Tobias – though I hate to use his given name and I got half a mind to just call him Protagonist X until I find any trace of a (coherent) personality in him. Just about every other character is more memorable and more consistent in their behavior than this guy … though that might be due to them largely being one-note fantasy tropes.

Tobias has to battle 19 other dudes to the death in a “labyrinth” (we’ll get to that) and whoever’s standing last gets to marry the princess/Savior/living goddess/only magical being in the realm.

There are less than 50 characters in here but a good majority of them have AT LEAST two names, all of which you are supposed to remember … or, if you’re anything like me, not give a damn and read over the names with not a second thought. This tactic really didn’t do anything to change my reading experience other than speed it up a bit. With the exception of a few, these 19 men have zero impact on the story aside from finishing off a chapter with their death.

I suppose the argument against calling TSC a YA fantasy is the vast number of deaths and the inclusion of what seems to be everybody’s favorite curse word of the decade. Hey, if you’re looking for a novel that has the word “cock” on each page, you won’t be disappointed. Every character says it in every situation imaginable. Was it supposed to show the bro-ish nature of the group? Why would a guy of high status, literally nicknamed the “Prince”, who fancies himself in every way superior to his peers, just casually whip out a “cock” in the middle of a conversation (you’re welcome for that mental image). Or a lady of the court who has literally been raised in a palace. I imagine shock value was Jenna’s goal here. But at the cost of believability.

Ok, so the labyrinth. Where is it? The cover (!) prominently states “Respect the labyrinth, obey the labyrinth.” Yet the first half of the novel, which I assume is supposed to revolve around said labyrinth, takes place in an underground tunnel. Nope, not tunnel-system, just one long, linear obstacle course. Not a single person gets lost, the group doesn’t take a wrong turn, the contestants don’t even have the option to venture off in a side tunnel because no such thing exists.

The obstacle course, which takes several weeks to pass, is interrupted by little camps. Here the contestants are allowed to rest, eat, sleep, all that. But no showers were mentioned. In fact, when they emerge from the tunnel and are allowed into the Savior’s palace, Tobias notes more than once how different his fellows looked after finally having been able to wash off the dust and stench of the last few weeks. However, some of the tunnel’s challenges include facing the Savior herself. For this, the contestants are prettyfied with an assortment of oils and perfumes rubbed onto their skin.
Just to clarify: Their skin is covered in dirt and dust and sweat for days. No shower. Then they’re oiled up. No shower. Then back to the tunnel to gather more grime on their skin. No shower. Repeat. By the end, I just imagined them with a thick grey, water-repellent paste as a second skin. And I continue to be equal parts confused and disgusted.

In these little camps, they are also treated for the injuries caused by any of the challenges. Here’s where Leila, the romantic interest, pops up. Dear lord! For an author who despises insta-romance, she sure didn’t shy away from creating one of her own in TSC. Granted, it wasn’t exactly love at first sight but all my alarm bells go off when after two weeks of knowing each other the guy proclaims his undying love, after three he puts her above his dear family and after four he’s ready to leave his entire existence behind and chooses the life of a fugitive just to be alongside her. Oh, and don’t get me started on their “sneaking around.” They are fully aware that if they are found out, there will be fatal consequences. But trying to be subtle or cautious? Nah, never heard of that. 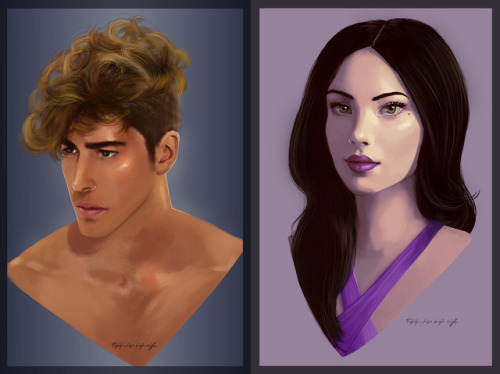 Tobias and Leila – from Jenna’s tumblr

Out of the entire cast, Leila is probably the one of which I have the most detailed mental image. Jenna doesn’t shy away from describing her characters – but not in an even remotely memorable way. All she specifies are skin and hair color. Maybe body type. And none of it sticks out in particular. I have no clue what our protagonist’s features are like. But then again, I know nothing about his personality either, so…
When the crew first meets the Savior, she is described in five physical characteristics. They are, and I am not kidding, all defined by their color: red hair, white skin, green eyes, pink lips. Oh, and her big ol’ tiddies. After those three lines, we are supposed to believe that she is the most etheral being on earth.
I am willing to bet that this is the 2.0 version of having a character so non-descript that any reader can see themselves within. Simply give a few details and any reader can envision themselves as the Savior with the addition of apple-green eyes. This was probably unintentionally the most entertaining part of the entire novel.

One last thing that puzzled me was the magic system. As far as we know, the Savior is the only magical being in the realm. And that magic is passed down genetically to the current Savior’s daughter (though I wouldn’t know what happens if the savior has only sons or even if she has more than one child). This isn’t explained or questioned at all, but ok. The tunnel and its challenges, however, are created by the Sovereign, the Savior’s father. Who doesn’t have magical abilities. Yet there is magic in the tunnel. Writing appears on the wall out of nothing and there are murderous flying marble statues at some point. The Savior wasn’t involved at all in the creation of theses challenges. So where did the magic come from? It’s a huge, irritating plothole that I doubt will be filled in the sequel.

Anyway, after several low-stakes battle scenes (we all know Tobias is going to survive) and plot-twists that everyone saw coming from a mile away, the book ends in a cliff-hanger and I’m guessing Jenna is currently working on part 2.

TSC wasn’t a terrible read, I got through it fairly quickly and Jenna does have a good sense of humor that comes out in a few scenes. Plus you can absolutely feel her passion for this novel, even though it could have easily been shortened.

And to any future authors: get yourselves a good editor so you don’t end up with an adequately written, paper-bound version of YA fanfic. (Not shaming YA fanfic, but there should be a higher quality standard if you want readers to pay for your story).

One thought on “Review: The Savior’s Champion”