You had me at perfectly landing Triple Axels, shooting shot guns, throwing knives and a full-on cliché training sequence (and everybody loves a good training sequence, don’t fight me on that) all within 2 hilarity-filled hours.

Right before the Academy Awards, Viki and I had a cheeky little watch of I, Tonya, a story based on the life of former US Olympic figure skater Tonya Harding. And lemme tells ya, the numerous Oscar nominations (and win!!) were certainly deserved.

Allison Janney gave an in every way unbelievable performance. As in, you can’t believe how inadvertently hilarious but also god-awful her character is. Momma LaVona Harding is the true embodiment of narcissism. Unashamedly, she molds Tonya into the best ice skater there is – starting at three years old, with all the toxic ‘tough love’ and manipulation you could imagine all the while claiming she was the one who sacrificed everything and that Tonya should be more grateful. Thank god, Tonya (Margot Robbie) has a personality just as strong. She might have been irredeemably jaded by her mom’s treatment and her dad’s abandonment but if you had to describe her in one word, it would be Fighter with a capital F.

She got the talent, she puts in the hours, she gives her life to figure skating and faces head-on all the elitist, overly privileged bullshit that seems to come with the sport. But defiance only gets you so far and at some point her only choice is to (somewhat) start to conform in order to have a shot at becoming part of the national team. But this isn’t defeat. It’s growing up and playing the game, which she still manages to do while keeping her authenticity til the very end. 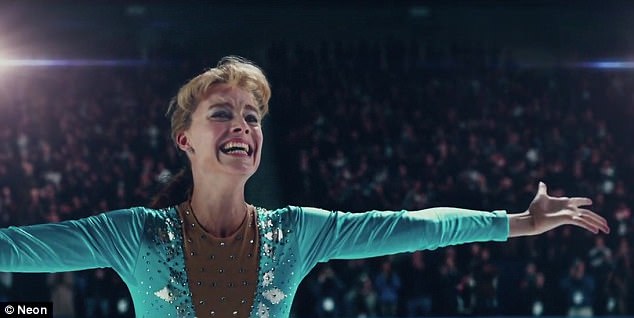 Her rise in success, however, is, apparently, inversely proportionate to her private life. I’ve already mentioned her family situation but, dear lord, her boyfriend (later husband) is a literal garbage pile. I never thought I would be disgusted by Sebastian Stan. But he did it. Jeff, the abusive, weasly shit stain of a person did it. Stan might not have been nominated for an Academy Award but he sure as hell wins the Creepiest Fucker award by a landslide. And yet, he’s not the worst character in this movie. For that I’ll have to direct you to his bud Shawn (Paul Walter Hauser) and his idiotic stooges who are ultimately responsible for Tonya’s professional demise. But you’ll have to experience them for yourself. I couldn’t possibly put into words how ridiculously, offensively stupid they are. But despite the tragedy of the story, every scene with those jacks will have you holding your belly in laughter.

Ultimately, I, Tonya is the story of how fleeting fame and success can be. How you can shine at the very top of the world and a week later be reduced to a mere tasteless punchline. But I found that, behind this popular story arch, there is an inkling of a different point of view. Instead of “be careful, don’t expect too much or you’ll be disappointed”, the meaning behind this movie seemed to be “give it your all and enjoy your moment in the spotlight because if it doesn’t last you’ll always know that at one point YOU FUCKING MADE IT!” and that’s worth everything.

I, Tonya is told in an interview+flashback format. Seeing all the protagonists confronted by their turbulent past leads to a multitude of narratives laced with lies, half-truths, possible slander and everyone trying to save face. Supposedly, the media spun the story of Tonya’s “incident” so much that by the end, the facts were a mere afterthought. Or not. I honestly can’t say for sure. But it sure made the conspiracy theorist in me giddily clap her hands!

The soundtrack to the film was a dream. Naturally, you’ll have some classical ice skating pieces in there but seeing Margot Robbie rock out in 80s hair and one of the many beautifully designed constumes to ZZ Top’s Sleeping Bag was a vision to behold. And do stick around for the end credits for some footage of the real-life Tonya Harding in her most glorious moment.

When you hear “80s/90s figure skating movie”, you might think it’s not the one for you but you would be sorely mistaken, my friend! You want to laugh your butt off with a lovable protagonist and a great, not quite reliable narrative? There you go. You’re welcome.