J.R.R. Tolkien, a literary genius, the grand master of fantasy, and a lover of children’s stories, started writing letters to his children in the 1920s, signed by Father Christmas. Every year for over 20 years, John, Michael, Christopher and Priscilla would receive handwritings that told stories of the North Pole and the adventures that took place there. 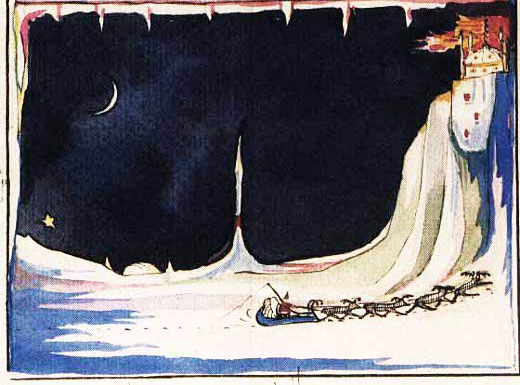 Whether you celebrate Christmas or not, Letters from Father Christmas is a dream come true for every imaginative child – literally or hiding inside a daydreaming adult. The book was compiled and edited by Baillie Tolkien, Christopher’s second wife and former secretary to J.R.R. It includes pictures of the actual letters and the delicate ink drawings that sometimes accompanied them. The attention to detail with fine embellishments and beautiful colors will make you drift off to another time.

Most of the letters are sent out by Polar Bear, Father Christmas’ most important assistant. He tells us stories about harsh weather conditions, unfortunate accidents and stirring goblin attacks. Similar to the incredibly extensive lore in The Lord of the Rings, these letters treat you with small snippets of historical details and cultural remnants within the Tolkienverse – a runic alphabet of the goblin speech for example!

“Goblins are to us very much what rats are to you, only worse because they are very clever; and only better because there are, in these parts, very few.”

This book also offers Elves, Cave-bears, Red Gnomes, and Snow-men, making you consider changing your wishlist to simply saying “I wanna go to the North Pole!” The magic of these tales does not just exist within the fantastical creatures but also shines through the storytelling in ways that I can only describe as love. Both to the craft and to his children. Every sweet and innocent part has the right amount of stakes and excitement to tease your curiosity.

Although I will never know J.R.R. personally, I long have fantasized about him being my endearing uncle who hides little parcels of gibberish for me. Or the loving grandfather who tells the same stories with the same amount of passion every time. This book immediately transports me into such a fantasy and while reading it, I have a feeling that is best described as blissfulness.

“So I will now send you lots of love, and I do hope that I have chosen the best things out of your suggestion lists. I was going to send ‘Hobbits’ – I am sending away loads (mostly second editions) which I sent for only a few days ago – but I thought you would have lots, so I am sending another Oxford Fairy Story.”

If you’re looking for Christmas presents that will spread joy, I highly recommend Letters from Father Christmas! It’s a little gem that will send your mind far but will keep your heart right at home.