This movie has gotten a lot of hate since its release in July and I am not okay with that. Consider this: is it worse than anything with the Minions in it? It’s really simple, I even made a graph for you: 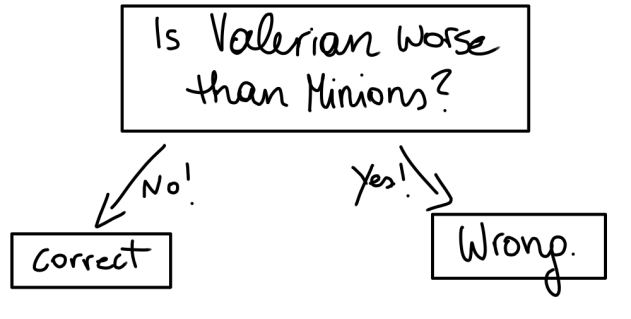 Okay, now you’re ready to hear out what I have to say about Dane and Cara’s first collab.

First things first: Dane Dehaan and Cara Delevingne are not Viola-Davis-kind-of actors and that’s okay. There’s a lot of talk about how there was no chemistry between them but I disagree. The subtlety and not over-the-top-cheesy-romantic flirtiness was refreshing. Even if it was just arguably replaced with over-the-top sarcasm, wisecracking and smack talk. And yet, that’s something we don’t get to see that often anymore. For me, what counts is the performers’ ability to hit the right beats when they have to hit them. And this movie is a freaking space opera, the relationship between Valerian and Laureline is not the most important thing anyway. Dane Dehaan was great as an arrogant and overachieving guy who only slowly discovers his own identity and struggles with opening up to others. Ain’t that soundin’ familiar?

Laureline is equally capable but more emotionally driven than her partner. She reminds him that rules can be broken when faced with ethical and, plainly, human decisions. And as hypocritical as this sounds in my head because I usually prefer more complex stories, that was enough for me. I enjoyed the Besson out of their simple but entertaining back and forth. It reminded me of certain movies from the past that people still love dearly. But now despise when similar ones are produced? I don’t even know, man. The only beat that had to be hit by Cara and that was absolutely nessecary to achieve emotional grounding and create a dynamic story arc: telling Valerian and the audience that love is stronger and more important than rules. And guess what? She hit it. I thought it was well done and more than sufficient for the purpose of that scene. To anyone who puked in their mouth a little: let’s not forget that was the exact same message in The Fifth Element which you probably like, right? If not, I still get it! Messages about love either get it right for you or they don’t. I don’t think there’s a universal way to do it so you just have to believe me that I believed Cara in that moment.

One of the obvious pro-arguments are the visuals. When I saw the movie, I wanted to turn around and watch it a second time IN THEATERS because it is simply a film made for the big screen. And I know, everyone says that about any 3D sci-fi special effects movie but more than once I have found myself questioning why I paid 3 bucks extra for one lazy bee flying at me. With this movie, I was in constant awe and searching every pixel of the screen for details, it was just freaking amazing. In an interview with Stephen Colbert, Cara says most of the time during filming, there was only green screen. They shot it for 6 months and Luc went on to work on it for another year. This gives more credit to the actors, in my opinion, because it’s hard to act when everything is green. And, of course, Luc because he had his vision and was able to create it from scratch.

At the center of the movie were the fantastically beautiful Pearls and their story of redemption and resistance against the profit-driven government. Their struggle to prevail near extinction and suppression due to their natural resources felt real and relatable. It was about the little people who lived a peaceful life but faced hardships in a war that had nothing to do with them. To me, this is just the right amount of tragedy and simplicity to engage me into their stroy line. What I liked most about them was their timidness and love they shared with each other. They felt like a real family who tried to support each and everyone in their community. With their beautiful exterior and badass technology and weaponry, they won me over in a heartbeat. Also, they had a certain gender-bending quality about them which I really enjoyed.

Action and adventure don’t fall short either. The market scene in the beginning was exciting and showed an array of crazy aliens and beautiful creatures. All the technology was extremely creative and imaginative: the iron pebbles gun, the taking control over another person’s body thing, glue canons, nano-bot-like spaceships and so much more. (I do not claim accuracy with these made-up terms) Mixed into that were a bunch of funny side characters who brought the comedy and light-heartedness. And sure, some felt more like a cheap parody (Ethan Hawke) but a couple of stupid jokes have yet to make me hate a movie. Bubbles, played by Rihanna, aced an awesome shapeshifting perfomance but unfortunately fell flat very quickly after she/he had fulfilled her/his purpose. Bubbles’ death scene was the one and only time I laughed at something that wasn’t supposed to be funny. And still, this movie had not managed to make me cringe so hard I forgot how to smile again. If you’re still not convinced, I got a couple more arguments.

This wouldn’t be a Luc Besson movie if there wasn’t some sort of social commentary. For example, The Fifth Element was a dystopian view of the future (mixed with a lot of funny pleasantries of course) and for anyone who’s into that sort of thing: check out the game Observer. Valerian criticizes capitalism, corporational greed, military blindness to the well-being of smaller communities and racial bigotry. At the very beginning, individuals from all sorts of different cultures, sexes, ages and races come together at the Alpha Station and shake hands (or perform other customs of greeting). I really enjoyed that scene and liked this optimistic view of an inclusive and tolerant society. The opposition to that is the big baddie aka Commander Arun Filitt (Clive Owen). He wasn’t the most interesting guy, not a lot of shades to his character but that was a message in and of itself. The idea of one evil personified being behind all the bad things happening often holds no truth. Clive served his purpose but really wasn’t the focus of this movie. It was really about Valerian experiencing his powers for the first time and, with the help of Laureline, finding the strength to disobey his orders (no matter who gives them) and save the Pearls.

And the cherry on top of all that: the Easter eggs and Bessonian intricacies. There’s the little alien that shits pearls and looks like the cousin of a picasso creature, the Mondoshawan cameo, an awesome soundtrack and my favorite part:

The two main characters making out while music starts playing as the camera zooms out/fades to black. Leelo and Korben showed them how it’s done and Cara and Dane are worthy successors.

Valerian and the City of a Thousand Planets is a funny, highly-entertaining, beautiful, action-packed and badass space-opera with the Fifth Element charme and pimped visuals and technology. The movie is set right for a sequel and I sure hope we’ll get one. Yet another positive thing: it makes me want to read comics all the more. What did you guys think?