A few weeks ago people have lost their shit over one of the newly released Spider-man Homecoming promotional posters. They say it’s over-crowded, badly photoshopped and looks like amateurish fan art. And yeah, sure, they could have done better. It is definitely a trashy lookin’ thing. If you told me that Stan Lee had puked on a sheet of paper and that’s what came out, I wouldn’t even question it.

But if you believe that this is the lowest point of photoshopping in recent higher-budget productions, if you think this the worst that film/tv promotion has to offer, oh dear, then you are mistaken. Lemme introduce you to the wonderfully entertaining, heartbreakingly horrible pile of garbage that is Freeform’s Shadowhunters.

As a super-fan of the book series and – judge me all you want – enthusiastic watcher of the 2013 movie The Mortal Instruments: City of Bones, I was excited, initially, when the tv show was announced. Especially since, in the beginning, there were rumors making the rounds about the film’s cast being involved in the show. However, my excitement quickly faded after seeing teaser, trailer, promo stills and, finally, that goddamned poster. This appaling abomination of an advertisement has been a thorn in my eye ever since I first discovered it in my Facebook feed. So to share my pain with you lovely readers, here you go: 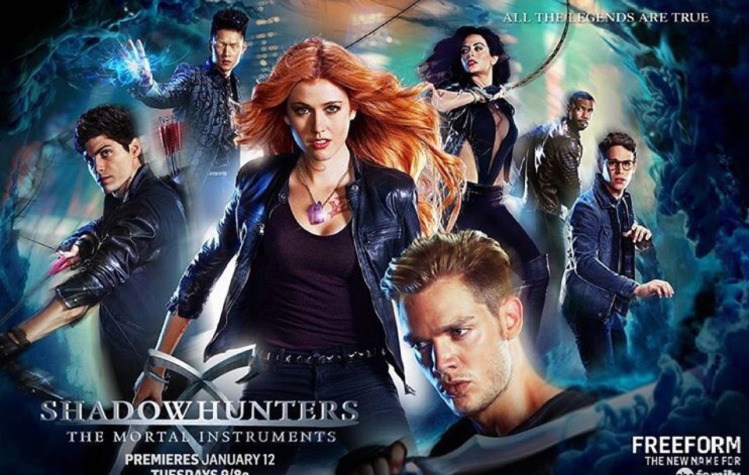 Alright. Now that this image is successfully burned into your retinas and the only thing that could get rid of it is literal acid, let’s get into the details, shall we?

Let me just say this: it is not a critique of the actors – a select few of them actually almost don’t make me want to turn off the internet for the next 3 years. But the poster doesn’t show any of that.

Ok, ok, where to begin? The hater inside me is so excited right now!!

This eye-sore of a picture shows off all the main heroes, or at least the cheap Freeform interpretations of them. They are all standing in varying degrees of proximity to the viewer and at different heights, obviously not fighting/running from the same enemy, judging from the directions they’re looking in. But hey, I’m a generous gal, so I’ll just assume the creators wanted to do a collage-style poster… less than expertly.

But what in good heavens is that background? Is it supposed to represent a portal which leads into (out of?) the NY skyline? Cause
a) our lovely protagonist doesn’t use those until we’re well into the story;
b) it is supposed to look like water, not like a vortex surrounded by
BLUE. MOTHERFECKIN. SMOKE.
And c) why would they have their weapons drawn while in a portal? That’s just an accidental stabbing waiting to happen.
But fine, I’ll give this one a pass as well, since the show is a re-interpretation and not a re-telling of the source material (which was already a re-telling of many other people’s work, supposedly).

As for the character depictions, the only one that makes sense in this picture is Simon, the mere mortal, as it were, defensively raising his hands but ultimately remaining a squishy lil’ powerless human – nerd glasses included (I’m not nerd-shaming btw, I have the same glasses). Him and Clary are the only two characters directly looking at the audience – and Alec, but I’ll get to that – which is a choice I very much appreciate. The looking, not the fact that they’re the only ones. Clary, however, is so bland it borders on offensive. We get the flaming ginger locks that look just way too fake but other than that they apparently had to find something to make her interesting so they just slapped that big-ass purple, glowing rock on her. Even her facial expression (if you could call it that) makes me wonder if it were more exciting to watch paint dry.

And I’m just so glad, the creator didn’t forget to enhance dem tiddies. What would a strong female character be without that perky cleavage, after all? Certainly not ‘well-rounded’…

Speaking of boobies: All I could think when I fist saw Isabelle was “Is she really only going to be an over-sexed sexy sex-bomb spreading her sexiness over every sexually sexy pixel of my laptop screen?” I already said I’m somewhat okay with the show diverging from the source material. But this is something so intrinsic to the character. Isabelle isn’t just a bomb-shell. Yes, she dresses provocatively and yes, she turns heads wherever she goes. But she is also one of the best fighters of the entire story. She is smart enough to know that a flimsy piece of lingery, like the one the wears on the poster, would never ever be a good idea in case of a fight. And those fights do break out A LOT at random times in the Shadowhunter universe. And those huge cut-outs only leave her open to attack from acid and claws (which both happen frequently as well). It’s simply not a shadowhunter uniform, is all I’m saying. Get it right, Freeform. Geez.

Next up: Alec. While there’s nothing to complain about his outfit, I gotta ask, why is he not looking in the direction his arrow is pointing? The bow is drawn, so he clearly is about to shoot something or someone. But apparently authenticity doesn’t matter one bit in this composition and we just needed to see his weapon in the most blatantly expositional way. Same with that blue Special Effect™ coming out of Magnus’ palm (who doesn’t look the least bit intimidating btw).

Luke’s greenish-brown jacket looks like Barbamama’s puke to be honest. Just color-wise absolutely incompatible with the rest. But then again, that whole image is so damn blurry, I’m sure several people have wanted to vomit at the sight of it.

So last but not least, let’s have a look at Jace. My all-time favorite character of the entire book series is clearly not being done justice by. Firstly, why, no seriously, why is he so close to the front of the poster? It just makes the seraph blade (which is a hugely important weapon in the series as well as the tv show) look like a pencil drawing. And, secondly, regardless of that douchebag haircut they gave him on Shadowhunters, they portray him as a 30 year-old grump who didn’t get enough sleep and is also on the verge of tears – none of which fits the complex, well-developed character we all know and (usually) love from the books. Since the show does take inspiration for its characters and storyline from the original book series, I will not accept the tired old excuse of “but Freeform wants to do their own version, they don’t have to stick to the source material” in such vital aspects.

The characters in The Mortal Instruments are the building blocks of the entire plot. So for the creators of this poster to release something so fundamentally flawed and off-putting is a disgrace. Ya shoulda done better, Freeform. I simply don’t understand how Cassie Clare can live with this mess of an adaptation – for which the poster is a perfectly horrible illustration.

But hey, that’s just my opinion. Feel free to let me know in case you disagree. And if you like the Freeform show, then you’re wrong but I wish you happy watching anyways.