This morning Viki and I went to a conference in this darling city of Vienna where we had the privilege to listen to a myriad of talks. Among those was a presentation by a former teacher of mine about the superhero genre and how it has adapted to reflect trends in social and cultural acceptance. Her research was focused mainly on male spuperheroes and the depiction of masculinity. She mentioned how comic books have become more and more inclusive by telling heroic tales of people of color, individuals of different social statuses, gay heroes and so on.

Well, actually no, there is no “so on”, apparently.

When I asked her whether she thought we might see an even broader variety of masculinities, i.e. trans and non-binary masculinities, she seemed to sort of evade the question and instead talked about X-Men’s Mytique and how she is indubitably portrayed as genderfluid. However, society appears to be quite a bit more lenient when it comes to different kinds of femininity (Mystique’s base form is more resemblant of a woman, after all) than with the masculine counterparts. So I went online – you know, as I do for 25 hours every day – to find out if my question can be answered there.

And just to clarify: I am looking at human(oid) dudes here, so scale-y, two-headed aliens with tentacles and unpronouncable names don’t count. (Also, I am not an expert when it comes to the DC/Marvel uni-/multiverses, so reign in the hate in case I get something wrong if you could.) 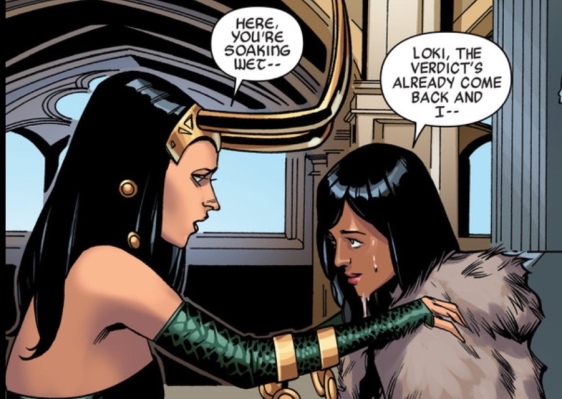 The first result that popped up was Loki. Arguably more a villain than a hero but I’ll let it slide. During his career he, according to the Marvel Wikia page, inhabited two female bodies. However, the first switch was involuntary (much like the X-Men Earth 1007 storyline) and when he realized this he fully intended to transfer his spirit back into a male form. The second gender switch was part of a mischievous plan for which he decided to take over Scarlet Witch’s body. So although Loki does play around with gender norms for a little while, I would not put him in the trans/non-binary category.

Next we have Daredevil. No, not Mr. Adorable two-thousand-and-always, the cutest of all Defenders. I am talking about Daredevil from Earth 1045. Only very little is known about her other than that she “at some point” underwent genital re-assignment surgery. Unfortunately, I cannot count this one either because a) this is not even a fully formed character and b) just like with Mystique, it’s again an issue of inclusive femininity.

So was I able to find what I was looking for?

I fought my way through the almost impenetrable clusterfuck of Marvel’s multiverse and was this close to giving up when I found him: an actual transgender man. He might not be as well known as Loki or Daredevil but with Marvel’s New Warriors coming to Freeform we might get the ball rolling on this guy’s popularity (and hopefully they keep him trans in the tv-show too). His name is Ken Shiga aka Koi Boi. Not only has he been seen sporting a snazzy binder in two issues of Unbeatable Squirrel Girl, he has also been confirmed to be a trans guy by co-creator Erica Henderson which makes it canon!

The first step towards even greater inclusivity has been made and many more shall still be in our future!

And although this whole post revolves around trans males and uncommon types of masculinity, I still want to give a huge shout out to AfterShock for creating the first transgender superheroine Chalice/Charlie Young in their Alters series. I will for sure give that one a read!