I’m not really an avid reader of coimc books. I enjoy them, I just never got that into it. Growing up I mostly read Lucky Luke, Asterix and DuckTales, simply because my brother owned them and they were a ton of fun to read on vacation. But since he wasn’t all that interested in superheroes, the DC and Marvel universes turned out to be something I didn’t know a whole lot about. But lo and behold, college came around where I took my all-time favorite course, which dealt with stereotypes in the genre of superhero comics. We discussed mostly Batman; Arkham Asylum and The Killing Joke were on the syllabus and I just felt like Jasmin on the magic carpet – a whole new world.

I started to delve into the stories of Green Arrow and Captain America (who is the absolute best in my opinion), however, I was invested not so much in terms of reading comics but rather watching the movies and tv shows. I realize that that is in no way the same as actually reading the vast and unbelievably creative stories of these heroes and heroines but I have become so familiar with the on-screen versions that the ones on paper would probably seem like completely different characters to me.

Just a few months ago I discovered a comic book series that I have become quite invested in. It’s called The Wicked and the Divine and it is a glorious piece of artistry. Not only does it have a story that’s compelling, intriguing and has me on the edge of my seat (figuratively, since I usually lounge around on my couch in the most awkwardly acrobatic positions when I read) but also the artwork is beyond stunning. So detailed, so vibrant, so full of emotion and wonder and at times incredibly haunting. After finishing the first volume I went straight to Amazon and bought the next three.

Along with those I also bought two volumes of an entirely different comic books series: Jughead. Ever since I have started to watch Riverdale, Forsythe Pendleton ‘Jughead’ Jones III has become one of my favorite fictional characters of all time, I’m not even exaggerating. What an intricate and twisted personality, what a rich and deep storyline! I wanted to know more about this character so I went ahead and bought the newest version of the Jughead comics, the one that was first published in October of 2015. The artwork by Erica Henderson is funky and I love it and I absolutely cannot wait to read it! 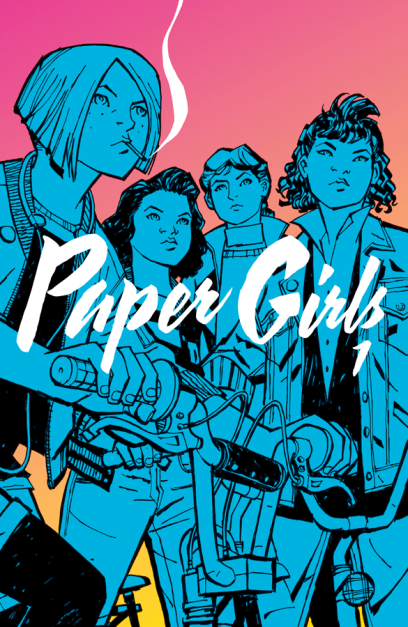 Another series which I have recently acquired but have not gotten around to reading is Paper Girls, a sci-fi-mystery-adventure comic. Again, very cool artwork, so colorful and unique. The cover of Vol. 1 in particular is just spectacular. I was told to have a crack at this series because I am a big fan of Stranger Things and Paper Girls supposedly is just like the Netflix show but with girls. Very excited to start reading.

For weeks now I can’t stop myself from browsing through comic book stores and the internet on the hunt for more stories like these, comics that have me enthralled from the moment I look at them. Apparently love at first sight does exist.