One of my favorite games in recent years has been Yandere Simulator. It’s a PC game that is still in development with the creator posting videos on his YouTube channel Yandere Dev and updating the fans on what he is working on.

The story of the game takes place at Akademi High and follows a student, lovingly known by fans as Yandere-chan, in her quest to eliminate anyone rivaling for her beloved Senpai’s attention. The finished version will have 10 rival girls with varying degrees of difficulty when it comes to their elimination. Methods for such eliminations range from sweet ones like befriending and matchmaking to straight up torture and brutal murder. But don’t forget to be stealthy or it’ll be an instant game over. It is an incredibly creative, innovative and entertaining game with vibrant colors and hilariously genius details.
(Ebola mode, anyone?) 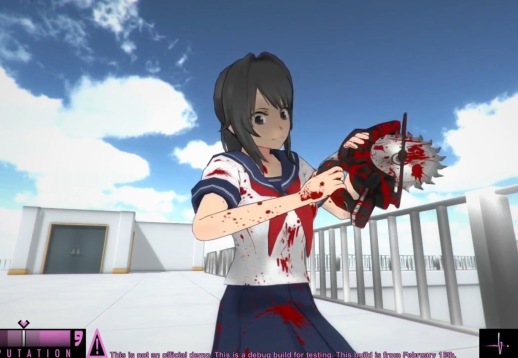 On the 1st of every month Yandere Dev uploads a video showing his progress, so I was very much looking forward to today’s video. And even more so when I saw the title “Yandere Simulator Male Rival Introduction Video“.
The protagonist has initially been introduced as a female student in love/obsessed with a male student wishing to eradicate female rivals. However, Yandere Dev has created a male version of our protagonist – Yandere-kun. Players can choose at the start of a new game whether they want to play as a boy or girl. Likely, it will also be possible to select a male or female Senpai. What has not (yet) been addressed is whether there will be male versions of the 10 rivals. I would say it is rather unlikely given the insane amount of time Yandere Dev is putting into the already confirmed characters, aka the 10 female rivals and side figures. If he was to add another 10 characters with their own background, personality, reactions and daily schedule, the game would with absolute certainty not be ready on its now intended release date. And I was fine with it either way. No big. Until today.

Oh, that Yandere Dev. He knows how to break your heart but put a smile on your face at the same time. Today, he realeased a video introducing character designs and hints of background story for 10 male rivals. And it was so much fun to watch. Some of them were really intense, like Aso Rito, the athletic guy, claiming “You know… I would put my life on the line for you” (1:22 in the video). My favorite was probably Osano Najimi, Senpai’s bff.

After presenting all these male rivals individually, there was a compilation of ‘candid’ shots and then the screen briefly went black. But, oh, it was not over yet. The final part showed Info-kun (male version of Info-chan, sort of a tech genius at the school who, for the low price of a few female students’ panty shots, helps Yandere-chan on her mission to defeat all rivals) typing on his keyboard, turning around, mockingly noting “You didn’t actually forget what day it is, did you?” (3:13)